The BeagleBone Black in its Natural Habitat

I've been having a lot of run playing with a BeagleBone Black these days, which is a spiffy little single-board computer. In specifications it is similar to Raspberry Pi, but it has a lot of general purpose IO pins on it; you can think of it as a marriage between the Pi and an Arduino (in fact, it has two Programmable Realtime Units -- on-board micro-controllers -- so that you can do input and output with micro-controller-accurate timings, but I haven't really played with that yet).

The Debian Linux distribution is the recommended OS, and it's slick. The problem is that it comes with a whole lot of things enabled -- the OS itself takes up about 95% of the EMMC!

These days my Linux distribution of choice is Arch Linux, a minimalist distribution that's fun to use in the way that Slackware used to be fun in the early 90's. But the process of installing Arch on the BBB -- or any computer for that matter -- is a bit complicated. Even so, the Arch distribution only take up perhaps 25% of the memory, leaving plenty of room for doing stuff.

There is information on the web about installing Arch on the BBB, but there are a few conflicts and errors, so I wanted to put together a tutorial, from start to finish. I also wanted to bring a few different sources of information together in one place. I have a really bad memory, so if I want to do something twice I have to keep pretty detailed notes.

I used a laptop running Arch to do this, so it's arch all the way down.

For this process you'll need a 4 GB microSD flash card and an adapter for your computer. The cards themselves sometimes come with a USB adapter, which is what I use.

The instructions here are largely correct (with an exception in the flashing process), but they leave a little to the imagination.

The first step, of course, is downloading the current version.

As a prerequisite, it's important to know which device the card represents itself as to your computer -- an error here could destroy your host computer's disk!

The easiest way to do this is to insert the card with a USB adapter and take a look at the output of dmesg:

so in this case the correct device is /dev/sdb.

You will want to zero-out the first few blocks of the card and create a partition (ext4, primary, including the whole disk). This can be done with the commands:

Danger Will Robinson: It's common practice when posting code snippets like the above to substitute something like /dev/sdX in the code, so that if someone just cuts & pastes without thinking nothing disastrous takes place. If I were a kind man I would do this too. But I haven't. So really, if you're following these instructions be careful. Verify which device the card presents itself as before you do anything with dd, fdisk, and the like!

As an example of the session:

Mount the File System and Create the Image

This is a strange one -- we'll be writing data directly to a file system with dd:

At this point we should be able to insert the card and boot it from the slot. Depending upon what OS is already on the BBB, you may -- or may not -- need to push the user boot button: with Debian it seems necessary, with Arch Linux it seems necessary to not push the button. Sometimes. Frankly, I haven't been able to figure out when the user boot button needs to be pressed. Try it first by pushing it, and if that doesn't work try it without the push.

Connecting for the First Time

One must boot the newly minted card and connect to the device. This is a bit easier if one has a regular BeagleBone laying about -- the BeagleBone has a USB serial console upon boot, which has been removed from the BBB. If you only have the Black, you'll need to attach the device to your network, examine the router to see what IP is assigned, and SSH directly (using the credentials alarm/alarm). If you have the BeagleBone, you can use the USB console:

You're now running Arch from the microSD. You'll want to configure it a bit and flash it to the internal memory.

Upon booting you will want to configure USB networking. This way you'll be able to connect directly over a USB cable, so you won't have to keep running over to your router whenever something needs attention.

The first thing to do is to enable the module that is needed for USB Ethernet:

Next you'll want to enable and start the USB network. First, create the file /etc/netctl/usb0 with the following content

And the interface needs to be enabled and started:

At this point USB networking should be working, so you can boot down the BBB and attach it to your computer directly. Note, however, that we haven't brought DHCP up on the board, so your USB network interface will need to be assigned an IP address by hand (for which you should use 192.168.7.1). On my laptop I run Network Manager and this is very easy to do from it's widget.

If you have done the above and are now connected through the USB, the BBB, by default, will not be able to connect to the Internet. To do that you'll need to add a default gateway on the board and enable packet forwarding on your computer.

On the host machine you'll need to add port forwarding. On my laptop (running Arch) this can be done with the following commands (as root):

On other machines the interfaces may have different names, but the procedure is the same. You can use the ip link command to see what your interfaces are named.

Now you'll want to upgrade and at least install wget:

The flashing of the device is similar to the initial card creation.

For this process the device to use for partitioning is /dev/mmcblk1, and the partition is /dev/mmcblk1p1 (note that the naming convention is a little different than for /dev/sda, as there is an extra character):

Write the Boot loader to Flash

The easiest way to configure the flash, now that it has been written, it to install the arch-install-scripts package and use the arch-chroot command:

We are now running in a chroted environment, and can configure the card. First, as always, we should upgrade:

We can do most of what we could do if we had booted directly to the card, such as create users, install software, configure the system, etc. Importantly, we probably want to enable USB networking as above. Changing the host name, installing avahi, and enabling it are also probably good things to do.

Once you've configured everything you want to configure. exit from the chroot shell, unmount the flash, and sudo poweroff. The next time you boot from flash you should have a new system installed.

Perhaps I'm just old-school, but I like to have /etc/rc.local for site-specific stuff.

For remote access it's useful to install and configure VNC on the device. This will allow you to work on a desktop remotely.

To do this a few packages must be installed:

Next you will want to create a script to launch the vnc server:

The first time the script is run it should be done manually (by the user under which the server should be run) so that the password can be entered. After this is done it can be added to rc.local to start automatically, for example:

will start the script as user mark.

Of course, other window managers can be used. If such is the case the FD_PROG entry in the above script should be changed.

I actually installed the enlightenment window manager once to see it if would work -- and it did -- but servicing the eye candy took about half of the CPU. 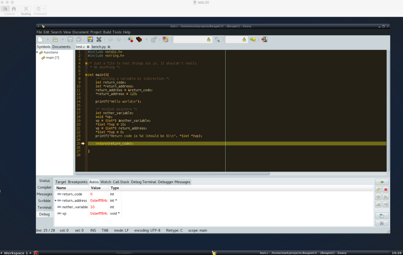 The BBB has a hardware entropy source, so it's good to use it

Note that there is a bug in the rngd service file that prevents it from starting at boot, so you'll probably have to manually start the daemon whenever you reboot (systemctl start rngd).

AVAHI/Bonjour/Zeroconf is useful, in that you can connect to your BBB via it's name (so you won't have to check your router for it's assigned IP address). Some computers -- like a MacBook -- will understand this natively, whereas others (like an Arch Host) will need a little configuration.

The name it announces will be the name in /etc/hostname with .local appended, i.e.:

If you're running Arch on the machine you're connecting from you'll first need to install a few packages:

You will also need to edit /etc/nsswitch.conf to include the following line:

Stuff Still to be Done