As discussed in a new musical scale, in the course of exploring alternate tunings and scales I developed a Python-based framework for creating and analyzing such scales. I'm pleased to announce that I have released this software as an open-source project.

Some of the package's features include:

The package may either be used as a development library or as a console-based application (but this requires some familiarity with Python). 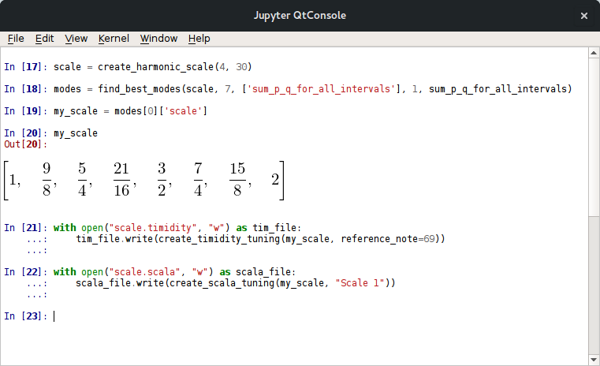 The package is registered at the Python Package Index, and can be installed via the normal channels:

However, some care must be taken in choosing the dependencies to install, so I'd suggest that you take a look at the project's documentation before installing.

Documentation for the project can be found at pytuning.readthdocs.io. The documentation is relatively complete, but as the software has just been released, it's probably somewhat riddled with typos.

The source code is available via an MIT-style open-source license, and can be accessed at GitHub.