As discussed in printing fractals. (which you may want to read if you haven't done so), in the mandelbulb the concept of complex exponentiation is extended into three dimensions. If a number is raised to the power N an {x,y,z} triplet is converted into spherical coordinates, the magnitude of the vector (r) is raised to N, and the spherical angles \(\theta\) and \(\phi\) are multiplied by N: 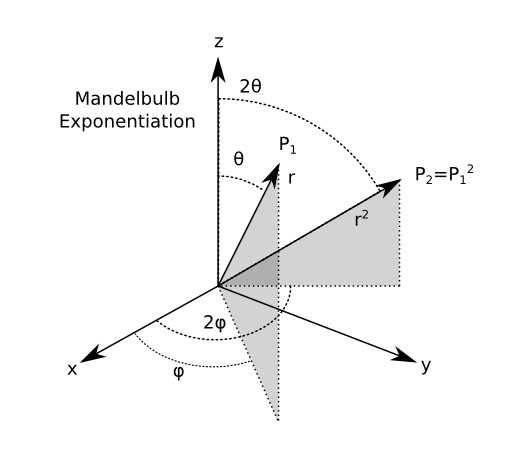 But there are other ways that the concept can be extended.

For the work presented here, multicomplex (or, specifically, tricomplex) numbers are employed. Briefly: In normal complex arithmetic a number is defined by the pair {x,y} as

This concept can be extended to three dimensions such that

One such extension involves rotation about a reference vector (or vectors):

This is shown graphically (for N=2) below: 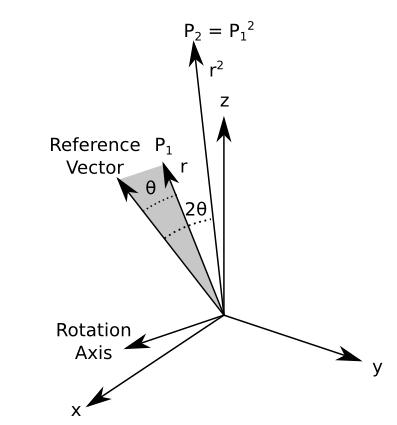 With one reference vector defined the structures produced have radial symmetry but do not exhibit anything too aesthetically extraordinary.

As an example, we can define our structure:

which produces the following output: 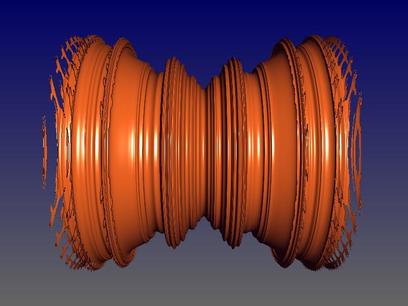 (It should be noted that the disconnected regions at the end could be rendering artifacts. It's possible that the figure is connected.)

However, if we define two reference vectors (producing two exponentiations/rotations) the figure exhibits much more structure. Given the definition

the structure produced is: 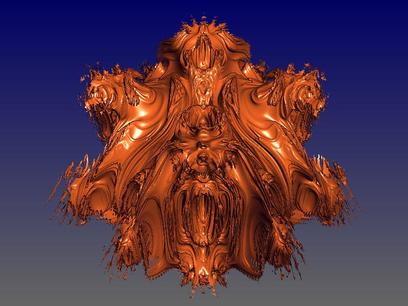 When three axes are added, i.e

we end up with even more structure: 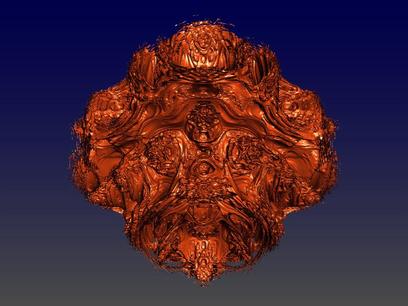 Recall that with the standard Mandelbrot set

the initial z is given as {0 + 0i} and c is taken from the coordinate in question, but that it is also possible to assign a constant to c and initialize z to the point in question ({x + yi}), yielding the julia set. The same thing, of course, can also be done with the equations proposed here.

For brevity I will show c as a real constant below. For the initial explorations the I used the following definition to transform the real constant to a tricomplex number:

where a is the real constant.

The julia representation of the two-axis figure shows much more structure than the Mandelbrot-ish render: 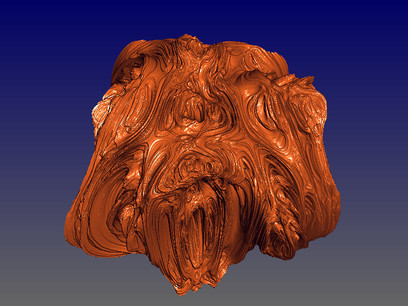 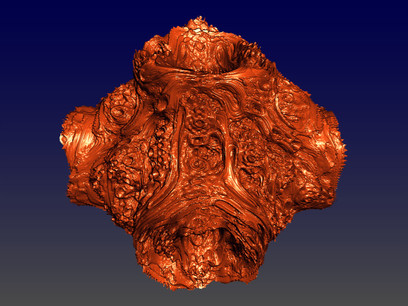 These structures show much detail considering the brevity with which they are defined, but are they fractal in structure? To investigate this we can ask a related question: do they exhibit self-similar detail at all scales?

The following slide-show shows successive zoom into the two-axis structure, with the approximate area of zoom for each figure shown in the preceding one. 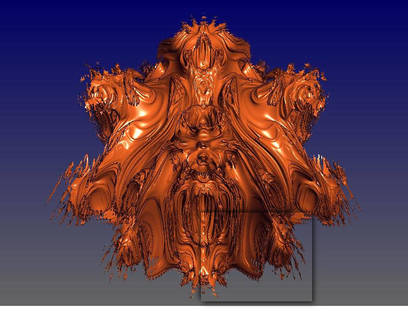 It's hard to say for sure (especially considering the rendering artifacts -- rendering these structures is non-trivial numerically), but it appears as if this figure may bottom out. In other words, detail may decrease as scale decreases.

However, looks can be deceiving, and when rendering such structures there are always practical considerations: formally, a point is in the set if it always stays bounded, but to determine this a certain number of iterations will be preformed. Higher levels of iteration more finely define the structure surface, but they take longer to calculate and they can produce rougher surfaces that are more difficult to render cleanly. Thus one always must make trade offs between tractability, clarity, and accuracy. 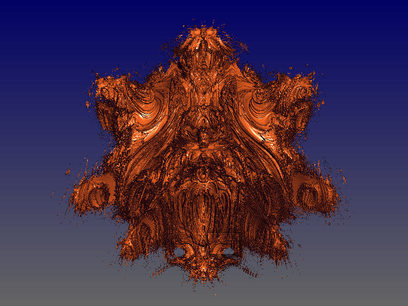 It's still impossible to say, but the situation is a lot more ambiguous now. There is a good deal more detail when the extra iterations are performed, and infinite detail is not beyond the realm of possibility. But there also appears to be many more rendering artifacts, and it is difficult to get a clean render of this figure at high iteration.

So we'll examine some of the structures which appear to offer more detail from the outset, starting this the julia-style render of the two-axis figure. Based upon the initial renders the julia-style calculations appear to be a bit more stable and well-behaved, so there should be fewer artifacts that may hide lower-level details. 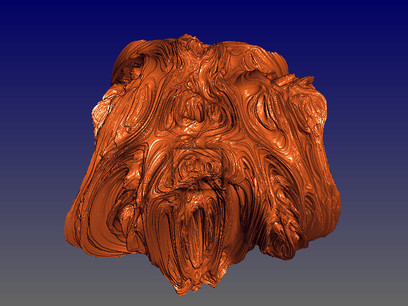 As seen above, there doesn't seem to be a lessening of detail at smaller scale. This is perhaps even more striking with the three-axis julia render: 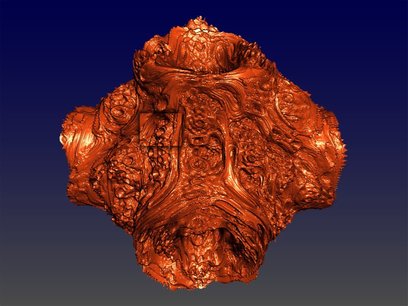 There is no sign of a lessening of detail; all appearances are that self-similarity continues to be exhibited at all scales and levels. In the sequence of images above the highest zoom level has a field of view about 4100 times smaller than the initial image, with an area about 17 million times smaller. Even at this level of magnification no lessening of detail can be observed. While this is not a mathematical proof, it seems reasonable to assert that this figure exhibits a fractal nature.